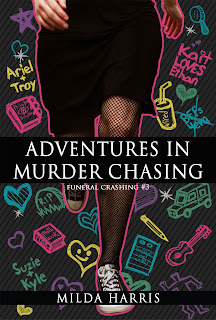 HAVE YOU BEEN WAITING FOR THE NEXT FUNERAL CRASHING BOOK? ADVENTURES IN MURDER CHASING WILL BE OUT ON MONDAY JULY 8, 2013! IN THE MEANTIME, CHECK OUT THE BOOK BLURB!

Kait Lenox is officially Ethan Ripley's girlfriend and she might even be kinda sorta becoming non enemies with her ex-bff Ariel Walker. Everything is going great! That is until Kait stumbles across another suspicious death at her favorite coffee shop, Wired. Not able to help herself, Kait sets out to investigate!


Suddenly Kait's problems go from whether or not she should say the L-word to Ethan to fears that the murder she's investigating might not be murder at all. Should Kait follow her gut or is she just chasing murders?

CHECK BACK THIS WEEKEND FOR AN EXCERPT FROM THE BOOK AS I COUNT DOWN THE HOURS UNTIL ITS RELEASE!!!!!!
Posted by Milda Harris at 7:59 PM