MURDEROUS MUFFINS RELEASE DAY! And A FREE Ebook To Celebrate! 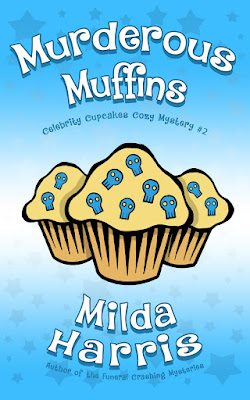 It's MURDEROUS MUFFINS release day! It's Book #2 in the Celebrity Cupcakes Cozy Mystery series. I'm super excited about it! It's been such a fun series to write since it takes place in Hollywood. I used to work in television and I live in Los Angeles so it's been fun to put all of that knowledge into my books! 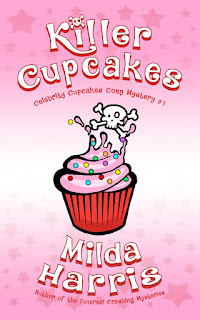 About Killer Cupcakes: Ava's first day of work at Celebrity Cupcakes and Coffee goes horribly awry when television star Penelope Rose drops dead after eating the first cupcake. Horrified that she might be at the top of the list of suspects, Ava and her totally hot co-worker Easton set out to investigate what happened. Will they be able to solve the mystery or will Ava's first day of work be her last?

About Murderous Muffins: Ava is excited to go on a Hollywood Celebrity Homes Tour with her co-workers from Celebrity Cupcakes and Coffee. Besides hoping to spot someone famous, she's hoping that she'll finally get an opportunity to snuggle up next to Easton. Too bad someone else has other ideas...murderous ones.

Tomorrow I'll be revealing the cover for Celebrity Cupcakes Cozy Mystery #3, Death by Chocolate due out on June 28th, 2016!
Posted by Milda Harris at 9:39 PM